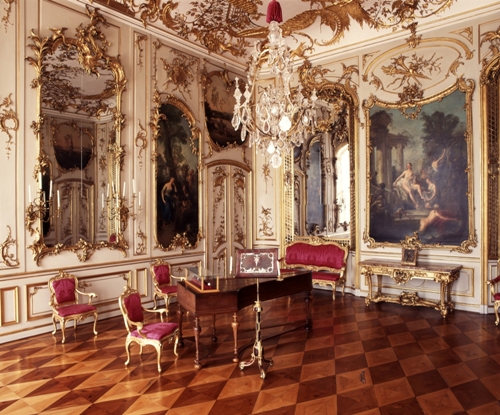 “He (Quantz) is described as tall and stout in person, grave in disposition and rough in manners. He played the tyrant over the king; but Fortune avenged Frederick, by making Quantz the slave of his wife, as she was of her lap-dog. This circumstance led C.P.E. Bach one day, in a party of musical friends, to propose this riddle: “What is the most powerful animal in the Prussian dominions?” As nobody could resolve it, Bach said: “This formidable creature is Madame Quantz’s lap-dog. Such is its power that Madame Quantz herself is afraid of it; Quantz is afraid of Madame Quantz; and Frederick, the greatest monarch in the world, is afraid of Quantz.” The king laughed heartily when he heard this anecdote.”

“It is so generous of you to provide me with concerts by Quantz. He is the god of music. A couple of local people were fascinated by him. Dispite he is not my god and I have hung up a picture of the true god of music above my piano “

(source: letter of Wilhelmine to her brother Frederick, Bayreuth 18 October 1732)

“It is very sad that you lost Quantz…..you will never find his equal….”

(source: letter of Wilhelmine to her brother Frederick, Bayreuth 16 March 1734)

“Quantz is obedient like a lamb… Jealousy must have been involved in Ruppin, because presumably it annoyed him that you play as well as he does. He has told me that several times.”

(source: letter of Wilhelmine to her brother Frederick, Bayreuth 29 January 1736).

“I wish that Quantz’s flute, which speaks more eloquently than Quantz himself, could tell you of all the feelings which stir in my heart for you, through the most delicate and moving notes, through the most poignant of adagios. The fire of his allegros is the living symbol of the joy I feel as soon as I am with you”

1. “At that time (1752) the Berlin Orchestra was the most brilliant one in Europa. Famous men such as Bach, Benda, Czarth, Graun, Hesse, Quantz and Richter were among the musicians.” (1772).

..ssd.ssd2. “The figure of this veteran musician is of an uncommon size. The son of Hercules he justly seems, by his broad shoulders and gigantic limbs; and he appears to enjoy an uncommon portion of health and vigour, for a person arrived at his seventy-sixth year.” (1772).

3. “In 1727 he (Quantz) arrived in London where he found the opera in a very flourishing state, under the direction of Handel. The drama of Admetus was now in run, of which, he says, the music was grand and pompous.” (Berlin October 2, 1772).

4. “Quantz acquaints us, that he had the good fortune to be well received by several people of rank, who endeavoured to persuade him to settle in England; Handel advised him to his measure; lady Pembroke, a great judge and encourager of music, proposed to make him a benefit in which baron Bothmar would have taken care of his interest, but he declined it; for, as he was still a servant of the king of Poland, he did not chuse to perform in public, thinking it as a duty to his prince to offer him the first fruits of his travels.” (Berlin October 2, 1772)

5. Vinci, Pergolese, Leo, Feo, Handel and may others, who flourished in the best times of Graun and Quantz, I think superior of them in taste and genius. Of his majesty’s two favourites, the one is languid, and the other frequently common and insipid, and yet their names are religion in Berlin and more sworn by, then those of Luther and Calvin.(Berlin October 5-9, 1772).

6. “Quantz bore no other part in the performance of the concertos of tonight than to give the time with the motion of his hand, at the beginning of each movement, except now and then to cry “bravo” to his royal scholar, at the end of the solo parts and closes; which seems to be a privilage allowed to no other musician of the band.” (1772).

(source: The present state of music in Germany, The Netherlands and united provinces. Charles Burney , London 1772.)

“The music of this man was divine and all Italians agreed that never a composer exceeded Quantz, maybe not even equaled him in the instrumental composition, especially for the traverse flute.”

“… if only you had heard the enchanting flute of Quantz, if you had seen how – in accordance with the very nature of the instrument – he aroused enjoyment and gaiety in the most resistant of listeners.”