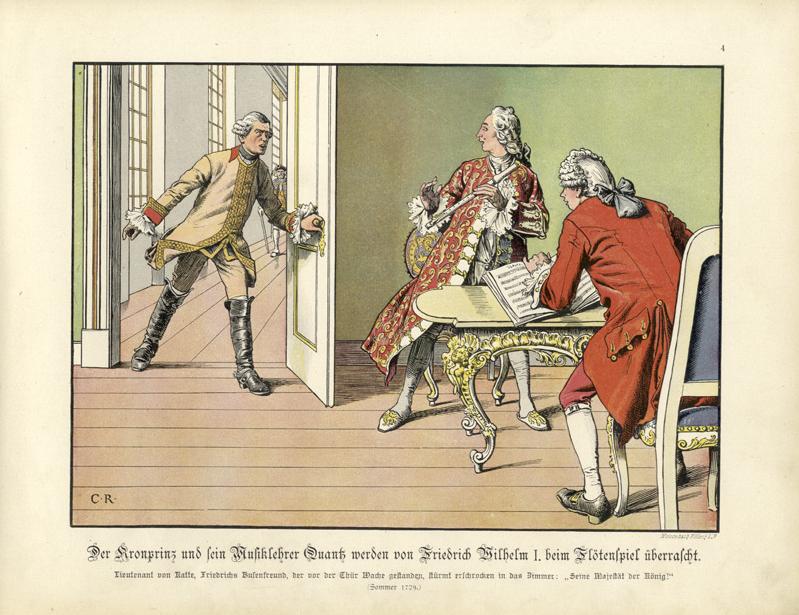 “One day when the prince, according to his custom in the afternoon, had thrown off his uniform and put on a dress in French fashion and a bag, and was practicing with Quantz, Lieutenant Von Katte entered his apartment in breathless haste and told him that the king was coming, and that he was close at hand. Snatching up the flutes and the music books, he had just time to hide himself with Quantz in a small closet from which the stove was supplied with fuel; while Frederick slipped on his uniform. The king entered. The unlucky bag, which the prince had no time to take off, betrayed him. The king on searching  about , discovered behind a curtain shelves containing books, and upon which also lay handsome morning gowns. These latter and the bag were doomed by the king to the flames; the books he ordered to be sold to Haude, the bookseller: and he did not retire till he had given his son a long lecture, which Quantz heard trembling in his hiding place. He was the more alarmed. Because he was dressed in a red coat, a colour to which the king had a particular dislike: and in his future visits to Berlin he took good care not to ware any other than grey or blue. The books were kept by Haude for the prince, who send for them as he wanted them, till the whole library could be restored to him.”

Source: Thomas Campbell: Frederick the great and his times. Volume 1.